“You might think Casablanca’s modern with its chichi stores and ritzy cars, but under that façade it’s raw…it’s tribal. Never forget that.”

Casablanca. Beirut. Cairo. Dubai. Doha. This comment made by Tahir Shah applies to all the modern cities in the Middle East. Travelers who do forget where they are can face some unpleasantness.  An English couple who engaged in PDA on the beach in Dubai in 2008 was put in jail. Likewise an American acquaintance of ours in Doha who argued with security authorities over some mundane matter. Never has my mother’s message to “mind my manners” been more relevant! At worst, you face incarceration or expulsion for ignoring the rules here- stated and unstated. At the least, you risk being regarded as an uncouth, ignorant American. But this is common knowledge about life in Muslim countries. What about the more subtle codes of conduct?

I attended a workshop with a Cultural Interpreter of sorts, a distinguished and witty Emirati man, who explained expectations for both professional and social situations. There are three key points to bear in mind at all times, the underpinnings of the Gulf Arab society. David Lamb, in The Arabs- Journey Beyond the Mirage, puts it succinctly:

“We are Bedouin. We are tribal. We are Islamic.”

Desert. Family. Religion. These three strands are woven into the fabric of day-to-day life. First and most important, is an understanding of Islam. Jeremy Williams commented in Don’t They Know It Is Friday?:

“A Muslim believes that God’s hand is present in every occurrence on earth. Nothing happens without God ordaining it.” 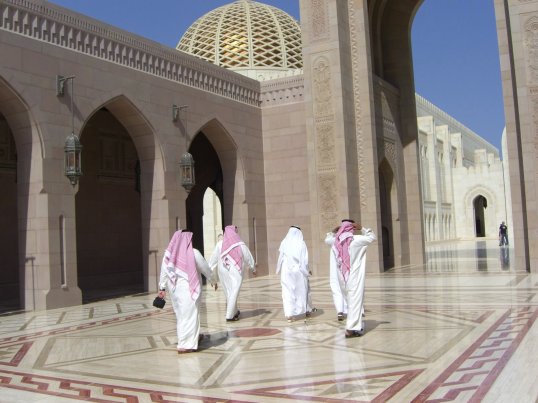 So when they say “Insha’Allah” (if God wills it), from ordinary conversations to more inflamed, political circumstances, they really mean it. You hear this phrase constantly. From taxi divers: Me-“Please take me to Bastakia.”- Driver-“Insha’Allah.”  From store clerks:  Me- “Do you sell this type of lotion here?” Clerk- “Insha’ Allah.”   From my Iraqi pottery teacher, Zaineb:  Me-“Will this piece be glazed and fired in the kiln by next week?” Zaineb- “Insha’Allah.”  In an interview on Al Jazeerah News: Reporter: “Will the conflict in Bahrain subside soon?” Official- “Insha’Allah.” You get the picture. I do not mean to trivialize this. I have great respect for their open and frequent expressions of faith. They believe that we humans are not in charge, no matter how good our intentions, how careful our plans, and how diligent our efforts.  An unsettling thought. One we recognize as true but would like to forget. Here you can’t.

Professional Settings: So how does this play out in business deals? Well, for starters, do not expect a meeting to begin at the appointed moment- or hour. Do not try to control time (thus, people). Our speaker told us that Arab businessmen find it more challenging to work with “linear” (his words) thinkers as opposed to “circular or global” thinkers. They do not adhere to punctuality and strict agendas at meetings. They do not like to rush, and they do not understand the Western insistence on sticking to scripted “bullet points”. What is the hurry? And what if the dialogue meanders down a different, more meaningful path? Many westerners tend to consider this approach vague, inefficient, and frustrating. More cynical types consider it evasive, even lazy. In my view, it is simply a call to be more patient and more flexible. “Insha’Allah.” 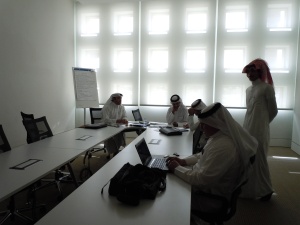 The Gulf Arabs’ more elastic and fluid sense of time is more than a matter of deference to the almighty power of Allah. It has evolved from their roots in the desert and at sea, where they live by the sun and the moon.  And you see examples of this cultural mindset everyday, all day long. So, I tell myself, ease up, slow down, breathe….

The Bedouin mentality and the focus on family are also evident in business settings. Arabs pride themselves on being hospitable above all else, to both friends and enemies.  The code of honor in the desert is to feed and shelter even hostile visitors for a minimum of three days.  They are civilized, formal and cordial in their dealings.

“There is always something royal in the manners of the desert.” Freya Stark, Baghdad Sketches

“As long as people call on you, you will prosper, the Bedouin firmly believe, so every person who comes to you deserves a welcome and respect.”          Marguerite van Geldermalsen, Married to a Bedouin

Gulf Arabs consider it rude to begin meetings without first exchanging social greetings, asking about one’s family and general well being. This exchange of pleasantries may last quite a while. And once the meeting finally begins, they have one habit that is surprising- and annoying- to most of us. Since the importance of family over-shadows every other concern among Arabs, they keep their mobile phones on during meetings, answer them, and sometimes have extended personal conversations while the meeting is in session. It would never occur to them to turn off their phones, in case a family member needs them.

Our teacher made a final point about professional collaboration. It is vital among the Gulf Arabs to honor a person’s dignity. Never embarrass a colleague. “Public praise. Private criticism.” I suspect it can get tricky to discern the line between questioning another’s viewpoint and criticizing him or her. A delicate dance.

Social Settings:  All of the above “rules” apply. Additionally, it is impolite to decline any coffee, food, or gifts offered. Accept their gracious hospitality.

Men should not shake a Muslim woman’s hand unless she initiates the gesture. Also, it is highly inappropriate for a man to compliment the wife of an Arab – “Your wife is so charming, so attractive…”- or for a woman to compliment an Arab friend or colleague’s husband. There are many layers to marital relations and to relations between the sexes in general.  Always true, but especially here.

Speaking of compliments, the most intriguing tip we were given has to do, again, with the Muslim faith. The term “masha’Allah” means, “praise God” or “thanks be to God.” Gulf Arabs do not like to take credit for any good fortune that comes their way, be it financial success, a promotion, a new car, or a handsome watch. They find it offensive to feel proud. In turn, the person giving the compliment might appear envious- quite gauche. So, if you are inclined to comment on a piece of jewelry or an accomplishment, be sure to add “masha’Allah.” For example, “Those are beautiful pearls, “masha’Allah.” The response will be, “Thank you, masha’Allah.” —-You can’t envy God, after all. 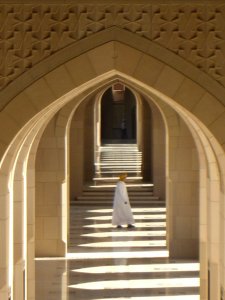 So, to sum up:
Be patient.
Count to ten. Or to one thousand.
Be flexible.
Be humble.
Be gracious.
Be discreet.
When in doubt, be quiet.

Thank you, Mother. You were right!  And good manners are, in essence, universal.

I will end this post with one of my favorite sayings, speaking of tuning into nuances and ambiguities, from an amusing little book of Arab proverbs: Apricots Tomorrow compiled by Primrose Arnander and Ashkhain Skipwith

“No answer is an answer.”

2 thoughts on “Mind Your Manners”