Round and Round She Goes

“…And Where She Stops,
Nobody Knows!” 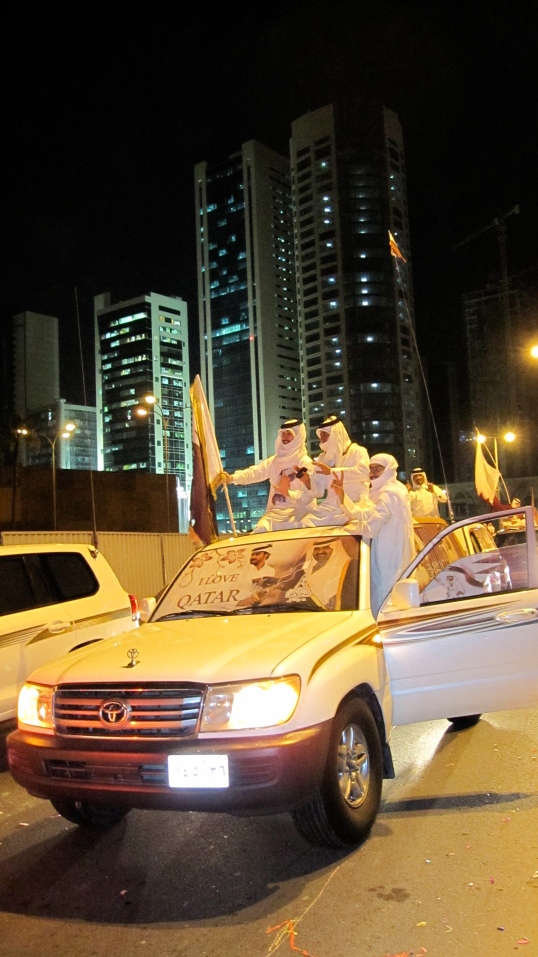 Isn’t that the little rhyme that goes with Pin The Tail On The Donkey, played at children’s birthday parties? When players take turns being blindfolded and spun around, then released, in a dizzy whirl, to find the donkey? This is a perfect metaphor for getting places in Dubai and Doha. It does feel like a game.

When I arrived in Dubai, my husband told me not to be concerned when I get in a taxi and the driver heads off in the exact opposite direction of where I am headed. That is just the way it works here. The roads loop around in all directions and on top of themselves, often into detours at building sites, eventually ending at the proper destination. There may be some deeply engrained Arab rationale for this, but I have not figured out what it is. You go north to go south, east to go west. It is all one big circle anyway. (I will resist the temptation to play with this as a literary allusion or a religious theme.) No- when it comes to snarled traffic, vague directions, roads to nowhere, and drivers who speak no English, it is hard to wax poetic. A sense of humor is, however, imperative. As is trust in your fellow human beings. “The kindness of strangers…”

In Qatar, I actually got my own driver’s license and joined the throng of cars. Here is the traffic picture in Doha. Main thoroughfares called C Ring and D Ring – except they are straight, not circles. Roads named after members of the royal family, becoming extensions of each other, that disappear into nowhere (i.e. the desert). Slip roads, marginal lanes, underpasses, overpasses. And- most important- the ROUNDABOUTS, that have colloquial names not marked anywhere on them or on most maps, so references to them as landmarks are not helpful at all for at least the first few weeks of driving yourself places.  Then there are drivers who zing from the inner to the outer of the three to four lanes inside roundabouts to exit, with no warning, seeming unconcerned about cutting you off. 360-degree vision is essential. And nerves of steel. I possess neither.

Here are some directions to friends’ homes, with addresses like  Palm Beach Residences, Falcon Street and Al Jazi Gardens, Al Dafna, Gate 6, Villa 32, as they were told me verbatim, written in my journal.

“When driving from Rainbow Roundabout to Qatar Sports Roundabout, take the 2nd right turn. At the end of this road, turn left and the compound is along the road a bit on your right.” (Better.)

“Start at Rainbow Roundabout (which way?) Go straight across Intercon Roundabout and turn left. Do not carry on over the bridge. At the next roundabout, go all the way around and come back going the opposite direction. There will be a mosque and and two embassies on your right. Look for a walled villa with umbrellas in the courtyard.” (Found it on the third try.)

“We are in Villa 19, Al Fardan Gardens, near the airport slip road, opposite the Lulu on D Ring.”

Here is one final journal entry, from March 2010: “Yesterday I got lost. I needed to get lost. It increased my confidence. I followed a friend’s directions to the new Lulu Hypermarket beyond Landmark Mall, where I was told they have the best selection of fresh fruits and vegetables in the city. Once I got going, I realized, too late, that he had been approaching it from another part of town. Thus, I got all turned around. I missed the necessary slip road and went many miles out of the way. At one point I was pretty far out in the desert, but I could not do a U-Turn due to a construction barrier. Since I am rarely in a hurry here- no appointments to make, no particular schedule- it was all right. I figured as long as I could see the tall towers of the West Bay peninsula, where we live, in the remote distance, I would be able to work my way back there.”

Mission accomplished. The fresh produce was delicious!
Next Post: An Exalted Space

One thought on “Round and Round She Goes”