Numerous people have influenced  me in the Middle East. Some have become friends.  Some have lifted my spirits after a kind gesture or a brief exchange—meeting at  some random intersection point along the way. Others remain total strangers because I have simply observed them in passing.  I have learned from them all. They are part of who I am now. The elderly South Asian woman in the security line at the airport, carrying her belongings in a plastic grocery bag, proud and defiant. She would not want anyone feeling sorry for her. And the Qatari man sitting next to me on the plane with his wife. When he heard me decline a meal, he purchased one for me, considering it rude for him to dine in front of me when I was not eating.  The distinguished Sudanese man, who has lived in Doha for thirty years and shepherded me through various bureaucratic hoops to obtain certain required certificates. I complimented him on his English. His modest reply was that he is still not very good at it. I explained that I only know about three phrases in Arabic, like “insha’allah” ( if God wills…) He replied that, in fact, that is the only phrase  I need to know ! A Muslim man who appeared to be from Oman, judging from his clothing, seeming ill at ease on the airport shuttle bus, anxiously rolling his prayer beads in his hands. I wanted to tell him that I was nervous, too!  We are all in this together.

The people who have inspired me the most have been the unassuming ones. The Filipino workers at the salons, the cafeterias, and hotels: Voltaire, Janine, Edna, Lou,  and Evangeline. Abi, from Ghana, who carries herself like a  goddess, like royalty. I see her chiseled, elegant profile in many African sculptures now.  There she is. Queen Abi. The porters at our apartment in Doha from Nepal and Sri Lanka. Cheerful. Courteous. Diligent. 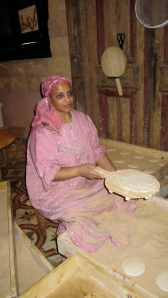 There are two men I would like to single out, who have moved me deeply.  The first is a Pakistani man, Saeed, who works in my husband’s office in Dubai, doing random errands and overseeing the mailings.  People totally depend on him. He is so dignified and humble it makes me feel almost tearful with tenderness toward him. Like every person I have met in the “service industry” over here, he does not expect to be tipped, only accepting it when forced to, and he takes pride in what he does. He is deferential, almost to an extreme, bowing and avoiding direct, sustained eye contact. I had vowed on arriving here to look directly at every person, male and female, rather than treat them as invisible. In the western world this is considered friendly, a gesture of respect. Now I realize that not everyone shares this sentiment. Such a gaze can seem intrusive, an invasion of personal space. Is it a challenge?  Demeaning? Does it signify hostility or haughtiness? Saeed  taught me to temper my rather brash American straight-forwardness with a more subdued manner. I am indebted to him, and I hold him in high esteem. I will treasure the image of his shy smile and gentle ways. He is as noble as a prince 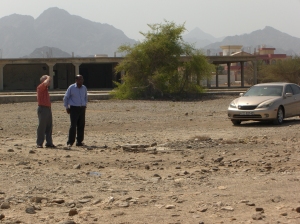 An Egyptian named Ashraf, drove me around Dubai  from time to time and took my husband, older daughter, and me on a road trip to Oman. Ashraf is relatively conversant in English and has adopted some western ways while maintaining his identity as a devout Muslim.  When he left me somewhere to shop, to visit a friend, or on some cultural excursion he would often use the time to go to the nearest mosque to pray. He wears western attire and reads English newspapers.  It is remarkable how these expats from South Asia and other parts of the Arab world have learned English on their own, without benefit of formal instruction.  Ashraf exuded about the heritage and beauty of his native Egypt and enjoyed telling me places to visit if I ever travel there.  As with most workers from other Arab countries or from Asia, his family is not with him. He has a wife and two daughters back at home, whom he is supporting through his work in Dubai. He sees them for a few days once a year. Successful drivers need several key skills and attributes, not the least of which is patience.  They spend hours waiting: waiting in clogged traffic jams, while their passengers content themselves in the back seat with their Smartphones and reading material or in conversation with a companion; waiting for their bosses to finish their business or their social engagements, sometimes late into the night. Ashraf works long hours, without complaining. Clearly he feels fortunate to be working at all. His calm, self-possessed, gracious manner evokes admiration, even awe. There is the strength of centuries within him.—–Since getting to know Saeed and Ashraf, I will never look at the world the same way again.