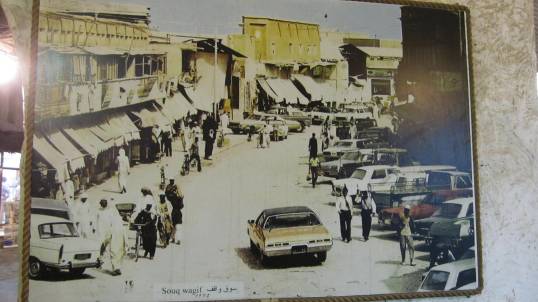 “Shopping with these merchants is not merely the going through of certain forms for the acquisition of necessary commodities- it is an art… an amusement…a study in character and national characteristics.”
Gertrude Bell, 1894

My favorite place in Doha, in addition to the Museum of Islamic Art, is Souq Waqif, which literally means “market standing.” It is located along a dry riverbed, the musheireb, near the corniche along the Arabian Gulf. In olden times, this was the center of town, and the vendors would stand by their temporary market stalls, ready to move them as the river rose and its waters encroached.

Journal Entry, March 2010: “It is dusk in the souq. The long afternoon siesta is over. As I park my car between two mosques, the solemn chant of the Call to Prayer rings out, ricocheting between the speakers.  Muslims, mostly men, file into the mosque, leaving their dusty sandals in a neat row beside the entrance. Women have set up tables to sell their wares. Jewelry, fabrics, snacks. Some have bowls of eggs they will fry on iron skillets. I search for one particular store, which sells handsome, rugged old furniture. No one can give me directions, even the policeman standing on a crate in the middle of a small traffic circle. I take this as an invitation to simply wander around some more. Who knows what else I might discover? As the sky darkens, colorful lights come on, and the market comes to life. This is when the real action happens. I sit down at the Lebanese café on the main pedestrian boulevard to sip delicious mint lemonade, people gaze and jot down notes in my journal. This is a popular gathering spot for locals and expats alike. Next to me,  men and women are smoking shisha.” 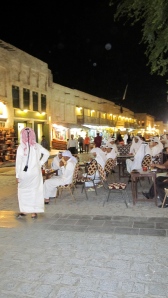 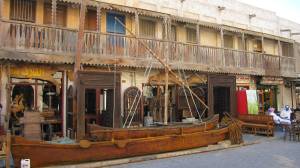 Muslim Qatari families meander about. Lively brown-eyed children climb over and under benches and tables and bolts of cloth.  Women are gliding- not walking- in their graceful, flowing abayas.  Young Muslim couples stroll along beside each other, their private emotions well concealed by their attire and demeanor. There is something enchanting about how some of the women, their faces entirely covered by a simple black scarf, whisper to their companions.

I purchase a few items. Several pashminas. Bronze camel candleholders. A book of essays written by young Qatari women. It still feels strange to me to bargain down the prices, especially since they are so low by American standards. It is expected, however, so I am refining my approach with the right phrases: “Oh, no, that is much more than I want to spend.” Or “But I saw this at another shop for much less.” Or- and this line works the best-“I do not have that much money with me.” Thus the bantering continues and a mutual price is agreed on. A friendly young man urges me to purchase some of his Omani silver jewelry and silver crown-type headdresses by putting them on me. I appease him by buying a couple pieces. They will always remind me of this day, this place.

An unfamiliar sight: old men sitting or lying in wheelbarrows, which they use to ferry about shoppers’ purchases. Human camels on wheels. They seem remarkably cheerful.

A familiar sight: a young adolescent boy, around twelve, still soft, smooth and pudgy in the cheeks, proudly wearing a thobe and ghutra, but awkward and self-conscious, flipping his head-scarf this way and that to get the right effect, tripping a bit over his gown.  A rite of passage. A man-child trying out his new identity. Like a young American boy wearing his first tie.

Journal Entry, April 2010:  “I have come to the souq to pick up some silver necklaces for my daughters and nieces. The designer, a Qatari man, has fashioned their names in Arabic on them. The mid-day Call to Prayer begins. Shopkeepers shut their doors to rest. Some head to the mosque or kneel on their prayer rugs. As I leave, I notice a South Asian man, probably a Pakistani, sweeping the street in the glare of the sun. I wonder when he gets to rest….”           Next Post: Our Global Family:Glimpses