“Rose-Red City Half As Old As Time”: Petra

“…to lose oneself in mystery and wonder while, like a wave lifting us into new seas, the history of the world develops around us.”

Freya Stark, The Valleys of the Assassins

The title of this post comes from a poem by John Burgon in 1845 describing the legendary lost city of Petra, nestled in a canyon, an immense desert wadi, in southern Jordan. It is one of the most enchanting places I have ever been, a glorious cross-section of ancient and natural history, archaeology, anthropology, geology, and architecture. Words will simply not capture it, so take a couple minutes to watch the slide show below after this brief overview.

“Petra” means stone in Greek. The entire city is carved out of multi-colored sandstone, marbleized with ripples and waves of endless shades of lavender, mauve, lilac, sage, topaz, ochre, sienna, salmon, bone, brown, and charcoal. I was mesmerized by the magical, shimmering beauty of this stone. Nature’s palette.

“…from the rock as if by magic grown,

The most common way to enter Petra is along a “siq” (shaft), a narrow corridor carved out between towering rock cliffs.  At the end of the siq, through a mere sliver of an opening, the spectacular façade of a monumental building appears. This is The Treasury, so called because it is thought that the urn at the top holds the riches of the Pharaoh at the time of the Exodus. As you wander through the valley, you see multiple levels of cave dwellings, temples and tombs chiseled into the mountains. Votive niches, water channels, cisterns, sanctuaries, storerooms, burial chambers, obelisks, pediments, facades, columns, bas-relief sculpture, inscriptions, pilasters, friezes, Ionic capitals, and terracotta pipes. There are the remains of a spectacular 5000-plus-seat theater and a temple along a colonnaded boulevard. The massive “Ed Deir” or “monastery”, a pilgrimage site and gathering place for Christian monks, sits at the top of 800 rock steps cut right into the mountain.  Well worth the climb! Petra contains a synthesis of decorative elements, a mixture of influences, from both east and west, as seen in the architecture. One wonder leads to another. It is breathtaking.

Nowadays Petra is primarily a tourist destination. Only a few Bedouin reside there. It is easy to time travel beyond the ruins, into the distant past, imagining the artisans and laborers who built this place and the families who lived and worked here. The city’s roots can be traced back to the Neolithic era, 7000 years BCE.  As an important agriculture center and trade route, it has been home to Edomites, Nabateans, Gulf Arabs, Greeks, Romans, Jews, and Palestinians. It was destroyed by earthquakes during Byzantine times, essentially deserted in the 14th century, and never restored.  An intrepid Swiss traveler, Johann Ludwig Burckhardt, rediscovered it in 1812.

The more recent world of Petra is vividly described in the book Married to a Bedouin by Marguerite van Geldermalsen, which I highly recommend.  This is the true account of the New Zealand author’s life with Mohammad Manaja, whom she met in Petra in 1978 and later married- their three children and extended family, their daily routines, the challenges they faced, the joys they shared. A life of austerity and grace, sacrifice and celebration, reverence and nobility.

“In the morning we use the star water to bathe the baby in.”    –van Geldermalsen 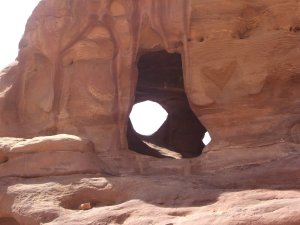 “Where poverty is borne with so much dignity that its existence is scarce noticed: where manners are so gentle that the slave and the chieftain are spoken to with equal courtesy….the immaterial alone is essential.”

5 thoughts on ““Rose-Red City Half As Old As Time”: Petra”